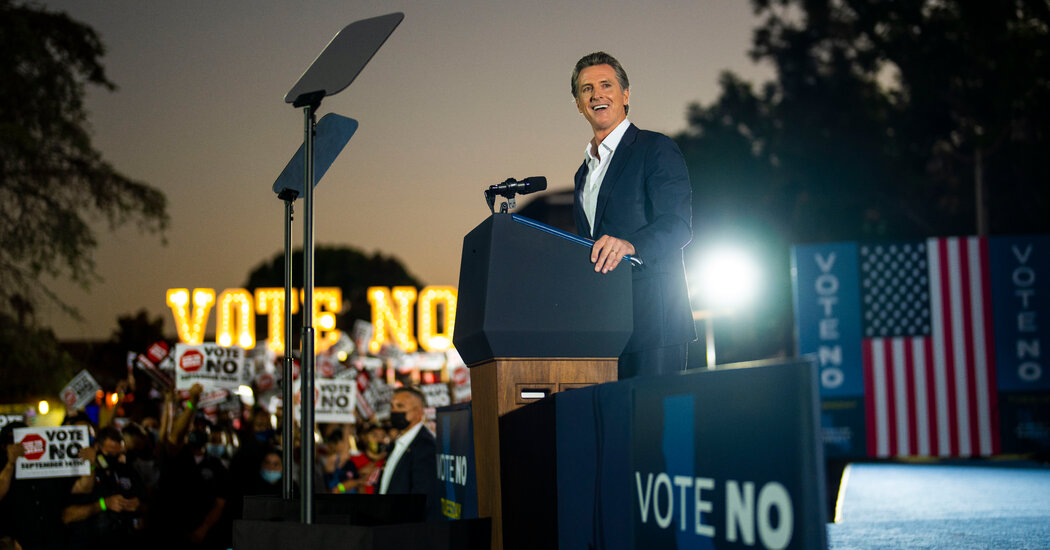 “In a vacuum, there was a lot of discontentment with Newsom and ambivalence with him among Democrats,” said Rob Stutzman, a Republican political consultant in California.

That started to change once “the abyss” got a name.

Mr. Elder isn’t the Trumpiest candidate imaginable, but he’s close. A novice campaigner with a background in conservative talk radio, Mr. Elder has a treasure chest full of embarrassing comments in his past — about women, about Black people — and a penchant for making more of them on the stump.

“Larry Elder has been the gift that keeps on giving,” said Steven Maviglio, a Democratic political consultant in California.

Again, Mr. Elder has been effective because this race is so much more about celebrity than policy. But he’s also effective because he, more than anyone else, is attuned to the Trumpist base, and is willing to tack accordingly.

After he drew fire from the right for telling the editorial board of The Sacramento Bee that Joe Biden won the 2020 election, he reversed himself. He has repeatedly and falsely claimed that the recall race is rife with fraud. He is crushing it among the “guys with an Uncle Sam costume in their closet” demographic, but not much else.

Arguably, Mr. Elder isn’t a serious politician; he’s running not to win, but to raise his media profile. But that very fact says something about today’s Republican Party. Many of its highest-profile figures blur the line between politician and celebrity, and act accordingly, even if their success as the latter undermines what we expect out of the former. Marjorie Taylor Greene and Madison Cawthorn — and, yes, Larry Elder — are only nominally politicians. In substance, they’re entertainers.

True, they’re entertainers who say scary things about guns, political violence, the pandemic and anyone to their political left. And true, some of them do win elections, usually in deep-red districts. And true, many people in the Republican Party are much smarter, or at least more thoughtful about elected office, than they are.